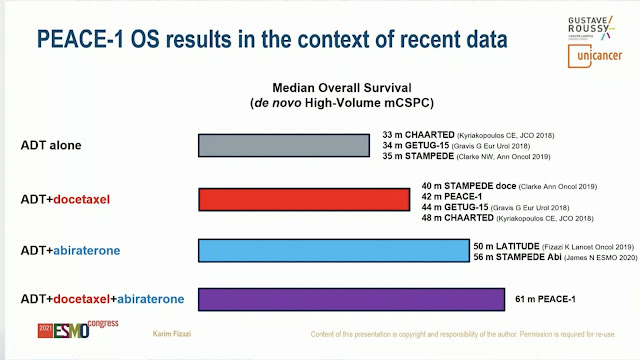 * time to radiographic progression or death
‡ time to first symptomatic event or death
§ time to symptoms or radiographic progression
While comparison is complicated, the extension of progression-free survival by 2.5 years by adding abiraterone to docetaxel alone is impressive. Docetaxel adds 1 - 1.5 years to progression-free survival over ADT alone. Abiraterone adds 1 - 1.5 years to progression-free survival over ADT alone.
Triplet Therapy with Nubeqa (darolutamide)
(Update 12/3/2021) Bayer announced that the combination of Nubeqa (darolutamide) and docetaxel + ADT increased survival over docetaxel + ADT alone in the ARASENS trial. This constitutes the second success for "triplet therapy."
(Update 2/15/2022) The first results of the ARASENS trial were presented at the 2022 ASCO Genitourinary Conference. All 1,306 patients treated from 2016-2018 were randomized to receive darolutamide (DARO) or placebo (PBO) on top of docetaxel and ADT. They found that:
(update 8/5/22) The FDA has approved triplet therapy with Nubeqa (darolutamide) and docetaxel for men newly-diagnosed with metastases.
Both the TITAN trial of Erleada (apalutamide) and the ENZAMET trial of Xtandi (enzalutamide) showed no benefit for the advanced hormone therapy when docetaxel had been used previously. Timing is important! When chemo or advanced hormone therapy is used as monotherapy, protective mechanisms (like cellular senescence) kick in soon afterward. It protects the cancer cells from destruction by the other medicine. They have to be used together or wait until the first drug stops working.
(Update 6/6/22) Triplet Therapy with Xtandi (enzalutamide)
An updated, subgroup analysis of the ENZAMET trial among newly diagnosed men with metastases confirms the triplet of ADT+enzalutamide+docetaxel increases survival. 5 year survival was 60% for the triplet vs 52% for ADT+docetaxel. The benefit was especially pronounced in the first 2 years of triplet therapy in men with high volume metastases. There was no benefit to the triplet in recurrent men with metachronous metastases.
Does docetaxel only benefit mHSPC patients with a high-volume of metastases?
This has stirred much controversy. Gravis et al. argue that the overall survival improvement from docetaxel was seen in CHAARTED only among men with high-volume metastases was a real biological effect (i.e., that high-volume PC is a different disease from low-volume PC, that responds differently to chemo). Armstrong argues for a biological difference. They acknowledge, however, that the small sample size of de novo men with low volume metastases (n=154) and their short follow-up (only 16% had died during the 48 months of follow-up) may be underestimating the benefit in the low volume, de novo subgroup. Remember that in CHAARTED, the low-volume subgroup was not recruited initially, so the follow-up is shorter in the group that needs the longer follow-up.
Clarke et al. argue that STAMPEDE is the more definitive trial because its sample size of mHSPC men with low-volume metastases was over twice as great (n=362) and the follow-up was longer (62% of the docetaxel patients had died during 78 months of follow-up). They did not find evidence of heterogeneity - low-volume PC responded just as much to chemo as high-volume PC. While the effect on low volume PC was similar, the statistical confidence in its effect did not meet 95% confidence. They attribute this to insufficient sample size (power). Suzman and Antonarakis agree that chemo should be offered to all mHSPC men, regardless of volume of metastases. It would seem that a meta-analysis combining the low-volume, de novo subgroups from both CHAARTED and STAMPEDE might be sufficiently powered to provide a more definitive answer. Patients wishing to understand why analyses of subgroups are controversial, may be amused by this analysis of STAMPEDE subgroups. The authors found that patients born on a Monday benefited the most from abiraterone, and it was statistically significant. while patients born on a Friday had the least benefit, and it wasn't statistically significant. They further found that men diagnosed on a Monday did not benefit from abiraterone, whereas men diagnosed on other days had a statistically significant benefit. These absurd findings are sometimes known as "p-hacking" or "data dredging." This interview discusses this error and the mistake of drawing biological inferences from statistical significance. Pre-specifying subgroups is one way to avoid such errors, but drawing conclusions from inadequately powered subgroups, while tempting, should be avoided. This controversy is reflected in the conflicting recommendations that constitute the standard of care.
The current NCCN guidelines state: "Docetaxel should not be offered to men with low volume metastatic prostate cancer, since this subgroup was not shown to have improved survival in either the ECOG study or a similar European (GETUG-AFU 15) trial." The current ASCO guidelines state: "Recommendation 1.2. For patients with low-volume metastatic disease (LVD) as defined per CHAARTED who are candidates for chemotherapy, docetaxel plus ADT should not be offered (Type: evidence-based, benefits outweigh harms; Evidence quality: high; Strength of recommendation: strong for patients with LVD)." On the other hand, the current AUA/ASTRO/SUO guidelines state: "15. In patients with mHSPC, clinicians should offer continued ADT in combination with either androgen pathway directed therapy (abiraterone acetate plus prednisone, apalutamide, enzalutamide) or chemotherapy (docetaxel). (Strong Recommendation; Evidence Level: Grade A) Canadian Urological Assn (CUA) guidelines state: "Docetaxel plus ADT may also be an option in patients with mCNPC/mCSPC with good performance status with low-volume disease (Level 2, Weak recommendation)." NICE (UK) guidelines state: "Offer docetaxel chemotherapy to people with newly-diagnosed metastatic prostate cancer who do not have significant comorbidities." European Urological Assn (EAU) guidelines state: "Based on these data, upfront docetaxel combined with ADT should be considered as a standard in men presenting with metastases at first presentation provided they are fit enough to receive the drug [1070]"
I personally believe that the STAMPEDE researchers make a stronger case pending better data from PEACE1.
It is also possible that genomics will allow better selection of patients for early chemotherapy. Hamid et al. examined tissue collected for the CHAARTED trial. They found a subtype called "Luminal B" that was associated with improved survival from chemotherapy. This finding has not yet been validated on an independent trial. Meanwhile, DECIPHER provides the test as part of its GRID analysis.
The major advantages of early chemo vs "saving it for later" are: