The Perils and Pitfalls of "Treating PSA" in Advanced Prostate Cancer

Prostate Specific Antigen (PSA) is a protein on the surface of all benign prostate cells and most malignant prostate cancer cells. In prostate cancer, expression of PSA is correlated with the size of the tumor (see this link). When prostate cancer first metastasizes, the tumor is limited in size by its blood supply. As it grows, the cancer creates its own blood supply by secreting growth factors called VEGF. The PSA from the cancer activates VEGF to form blood vessels that bring oxygen and nutrients to the cancer and lymph vessels to drain fluids from the growing tumor (see this link). Tumor blood supplies are not as patent as those of benign tissues. Healthy prostate tissues with patent blood supply, and micrometastases that have little or no blood supply put out very little detectable PSA into the serum (although the cells express high levels of PSA). But the leaky blood supply of tumors allows PSA to enter the serum where it is detected by a PSA test. So, the larger, more established tumors of a given patient create almost all of his detectable PSA.

I. Selecting for low PSA subtypes

For most men with advanced prostate cancer, PSA is their best biomarker of progression - more detected PSA means more progression. This may change as the cancer evolves. A highly mutated tumor may put out less PSA. Highly undifferentiated kinds of prostate cancer, and other relatively rare sub-types (e.g., ductal, neuroendocrine, basal cell, "double negative," etc.) may evince little or no serum PSA.
So it is possible, when such phenotypes are present and they are mixed with "normal" prostate cancer, to provide treatments that kill off the "normal" prostate cancer cells, leaving the low-PSA subtypes behind. Such a situation has been identified in patients heavily treated with chemo and enzalutamide. It is called "treatment-emergent neuroendocrine prostate cancer" (see this link) and has been identified in 17% of heavily-treated patients.
Another example of a treatment that may select for low-PSA subtypes is Lu-177-PSMA. If the patient has two types of prostate cancer, one that expresses PSMA and PSA, while his other cancer expresses neither, PSMA-targeted therapy may eliminate the source of most of the PSA, leaving more virulent subtypes behind (see this link).
This type of situation is dangerous if one relies on PSA as the principal biomarker of progression. One may be lulled into complacency by deceptively low PSA.
It is worth noting that two FDA-approved therapies for prostate cancer, Provenge and Xofigo,  have been proven to increase survival, but have little or no effect on PSA.

Patients often self-medicate in the hope of wresting some control over their cancer. The internet is full of "evidence" that this or that natural supplement may slow progression or even cure the cancer.  Serum PSA is detected by an antibody that can detect amounts as low as a nanogram of PSA per ml of serum. This kind of sensitivity has a cost - the antibodies are subject to interference by other substances that may be present in the serum. So far, the list of substances that may interfere with PSA tests, creating false negatives, includes biotin, curcumin, genistein, EGCG, resveratrol, capsaicin, saw palmetto, pygeum, beta-sitosterol, and statins (see this link). The false negative PSA readings may fool the patient and his physician (who may not be aware of the patient's supplement use) into believing that the cancer is under more control than it really is. Patients who use any complementary therapies are twice as likely to die of their cancer (see this link). 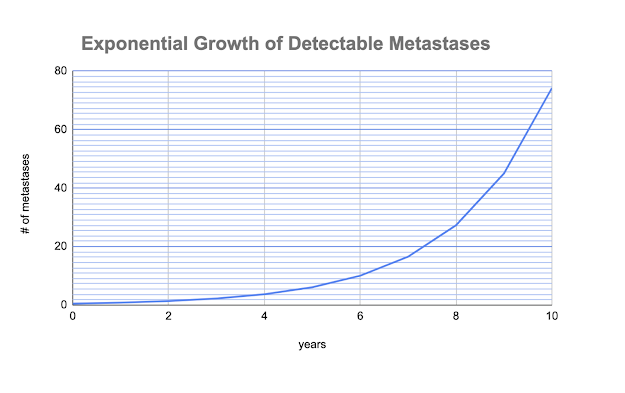 In men who are PSA-recurrent after prostatectomy, it takes a median of 8 years for the first metastasis to become detectable (see this link). After that, I've seen that more than a year can go by between the detection of the first metastasis and the next one. Some researchers, who should know better, observed that in their patients who had early metastases treated with radiation, new metastases did not occur for a long time. They attributed the delay to the treatment rather than the natural history of metastatic progression  (see this link). It is impossible to know if there was a delay in progression without a randomized clinical trial.
What is really happening during this extended time period? The accepted theory is called "seed and soil." There are millions of cancer "seeds" in the serum, the lymph, around nerves, and hiding in various tissue reservoirs (mainly in bone tissue). While they appear to be quiescent, they are in fact changing the "microenvironment" of the tissue they are in. They are transforming the tissue to make it more conducive to prostate cancer growth, building networks of collagen, fat, blood vessels and nerves, influencing healthy cells to become cancerous, and preventing the immune system from destroying the new nests (see this link for a fuller explanation).
Because it takes such a long time to build up the metastases to the point that they are detectable by even our most sensitive PET/CT scan (the tumor detection limit is about 4 mm - millions of cells), it seems that there is little there and even less going on. This is called "oligometastatic" cancer. It seems like all the cancer can be picked off by playing whack-a-mole -- zapping the few detected metastases with intense radiation (called SBRT) as they are detected. In fact, it is well-established that SBRT provides excellent "local control." "Local control" means that the metastases are usually completely annihilated by just one or two "zaps" (see this link). Because the detected metastases are the source of almost all the PSA, PSA can fall to undetectable levels after such treatment of oligometastases. But the cancer is far from cured - the PSA has been treated, but the cancer is still micrometastatic and systemic.
Those who believe that such treatment can result in a durable remission believe that the immune system can clean up the rest of the cancer.  The ORIOLE trial (reviewed here) showed that SBRT created a T-cell response. If that T-cell response is sustained, they argue, the activated immune system can "clean up" the rest of the cancer. The skeptics argue that T-cell responses are usually not sustained. Trials of numerous immunotherapies (e.g., Prostvac, GVAX, GM-CSF, etc.) have failed to show a benefit because the early T-cell responses are countered by adaptive responses. Prostate cancer is notoriously "cold" to immunotherapies.

What we really want to know is this: will the treatment enable patients to live longer? Overall survival is the gold standard of success of randomized clinical trials. The "problem" for clinical trials is that prostate cancer is such a slow killer, that it may take 15 years or more to discern a difference (see this link) if patients have localized or recurrent prostate cancer at the start. (For most other types of cancer, 5-year overall survival is more than adequate.) Clinical trials are often ended when half of the control group die (median survival). But, depending on patient characteristics at the start, median survival may never be reached within the duration of the clinical trial (see this link and this one and this one).
Prostate cancer-specific survival (how long before patients succumbed to their prostate cancer) is little better. It is also hampered by the fact that patients with prostate cancer may die of something else sooner, possibly because their cancer was debilitating. It is often unclear to the doctor who signs the death certificate whether the cancer was the end cause, a contributing cause, or a non-contributing factor. To get clinical trial results before new medical science and technology renders the results irrelevant, we want to use surrogate endpoints that are highly correlated with and predict overall survival.
The earliest endpoints that can be used to measure the success of a prostate cancer therapy are PSA based. All of the following surrogate/secondary endpoints are PSA based:
The following surrogate endpoints are not PSA-based:
As an example of circular reasoning, we can see in the ORIOLE trial that 6-month Progression Free Survival (PFS) was chosen as the primary endpoint. PFS was defined as  PSA progression (by >25% over nadir and by > 2 ng/ml) or radiographic progression or death. As we can readily see in the exponential growth curve, the odds of a new metastasis on a bone scan/CT are very low and there are not likely to be any deaths. Therefore, PFS was almost entirely PSA progression. But the protocol "treated PSA." It is therefore illogical to conclude, even for a Phase II trial, that oligometastatic treatment slowed progression.
It is worth noting that radiation of the prostate ("debulking") has no survival or progression advantage when there are multiple metastases, only when the metastatic burden is low (see this link). The prostate is, of course, the source of all metastases, and an ideal environment for metastases to develop and grow. Metastasis-to-prostate spread has been observed. In a meta-analysis of the two debulking trials called STOPCAP M1, researchers found that there was a statistically significant reduction in PSA progression (by 26%), even when there was no benefit in terms of metastatic progression or survival. Treating PSA even by debulking the entire prostate is not in and of itself of any oncological benefit (there may be a palliative benefit, however).

While ORIOLE, STOMP, and SABR-COMET were Phase 2 clinical trials whose results were not meant to change practice, many patients and their doctors (often under pressure from patients) would like to believe they do. If the metastases are in places that are safe to irradiate (e.g., away from the mediastinum), there is little risk in doing so. However, if they do not understand the circular reasoning evident in the ORIOLE trial, they may put off therapies that are known to increase survival. There is also a risk of unreasonable expectations.
Some patients (and doctors) believe that by delaying ADT, they can increase their quality of life, and delay castration resistance. Neither is true. Contrary to popular belief, decreasing the intensity of hormone therapy and delaying its use brings earlier castration resistance and death. The strongest evidence for this comes from the STAMPEDE (on Zytiga and Xtandi), LATITUDE, and SPARTAN trials. Among men who were newly diagnosed with metastatic prostate cancer:
A clear pattern emerges: early use of intensive hormone therapy prolongs survival and prolongs the time to castration resistance. Men who were oligometastatic benefited from early, intense hormone therapy.
The TROG 03.04 RADAR trial examined the duration of hormone therapy in high-risk men treated with radiation.  They found that, after 10 years of follow-up, men treated with 18 months of ADT survived longer, and reached castration resistance later compared to men treated with 6 months of ADT.
The TOAD trial looked at starting ADT at the first sign of recurrence vs. waiting for metastases to be detected. Men treated earlier reached castration resistance later. It also showed there was no major detriment to global health-related quality of life by starting ADT earlier (see this link).
Maha Hussain reported the results of a randomized clinical trial comparing intermittent vs continuous ADT in recurrent men with metastases. She found that:
Taken together, all these major randomized clinical trials show that the best way to use ADT in the oligometastatic setting is to use it early and heavily. Reducing the number of cancer cells as quickly and effectively as possible, even reducing those cells that haven't begun to measurably contribute to PSA, extends survival. The effect of evolutionary selection pressure allowing castration-resistant cells to survive is dwarfed by the reduction in sheer numbers. Circular reasoning may harm patients.
4. Future Clinical trials
We have learned some lessons about clinical trials for oligometastatic treatment:
These randomized clinical trials (RCTs) are currently active:
Posted by Allen at 9:45 AM 18 comments: