PARP inhibitors have been approved for men with metastatic castration-resistant prostate cancer (mCRPC) who have certain defects in their DNA-repair mechanism, mainly defects in their BRCA genes. So far, two PARP inhibitors have been approved: olaparib (Lynparza) after progression on abiraterone (Zytiga) or enzalutamide (Xtandi), and rucaparib (Rubraca) after a second-line hormonal medicine and docetaxel. Two other PARP inhibitors, niraparib (Zejula) and talazoparib (Talzenna) are not yet approved. (See this link). PARP inhibitors prevent cancer cells from fixing DNA mistakes that are more prevalent when one already has the defective BRCA gene.

Hypothetically, PARP inhibitors can delay progression in cancer cells whose DNA is already being disrupted by radiation: Xofigo or Pluvicto. Lynparza has been found to have no benefit when used with Keytruda. A trial of bipolar androgen therapy (BAT) with Lynparza found that the combination delayed progression considerably in men without DNA-damage repair defects. They may also be useful when cell replication is being slowed by docetaxel+carboplatin or second-line hormonals, even in men who do not have DNA damage repair defects. Enzalutamide may be able to prevent cross resistance between docetaxel and PARP inhibitors (see this link)

The PROpel clinical trial randomized 796 mCRPC patients in 17 countries to get either:

With about 21 months of follow-up, radiographic (any kind of imaging) progression-free survival (rPFS) was:

Follow-up was not long enough to detect significant differences in overall survival, but other secondary endpoints showed benefit for the combination:

Some adverse events were markedly increased among those taking olaparib:

After 19 months of follow-up:

Among those with DNA repair defects:

A more granular analysis of specific DNA repair genes suggest there may be a benefit (sample size is low) in men with defects in:
I don't know why men without DNA repair defects benefited from the PARP inhibitor in the PROpel trial and not in the Magnitude trial. I can conjecture that:

The PROfound Trial has reported (here) significant improvements in progression-free survival in men with BRCA2, BRCA1, and ATM gene mutations who took the PARP inhibitor, olaparib (Lynparza). BRCA2, BRCA1, and ATM germline gene mutations are found in about 8% of men with metastatic castration-resistant prostate cancer (mCRPC). The study also included men in whom those genes were mutated in their tumors (called "somatic" mutations). PARP inhibitors inhibit an enzyme that supports the survival of DNA-damaged cancer cells. Lynparza is FDA-approved for ovarian cancer and breast cancer. Other FDA-approved PARP inhibitors comprise Rubraca (rucaparib) and Zejula (niraparib) for ovarian cancer, and Talzena (talaparib) for breast cancer. They are all in clinical trials for prostate cancer (see this link).

Their interim (median 1 year) findings comparing Lynparza vs Xtandi/Zytiga were as follows:

(update 5/19/20) The FDA approved Lynparza for mCRPC patients with germline or somatic homologous recombination repair mutations who have progressed on Zytiga or Xtandi.

In a small study (12 BRCA1/2-mutant, 5 ATM-mutant), Marshall et al. reported activity in men with BRCA1/2 mutations, but not ATM mutations:


Similarly good responses among men with bi-allelic (both genes mutated) BRCA1/2 mutations vs other DNA-repair mutations were reported in a Phase 2 trial of niraparib. The FDA has granted it "breakthrough therapy" designation.

Men with CDK12 mutations (one of the DNA repair mutations in Cohort B of the PROfound trial) unsurprisingly did not respond to PARP inhibitors (see this link).

Preliminary results of the TRITON 2 clinical trial of rucaparib in men with DNA-damage repair (DDR) deficiencies (either germline or somatic) were also reported. Clinical benefit (the % who had no radiographic progression and stayed with rucaparib) at 6 months and 12 months for each of the DDR genes found were as follows:

There was high treatment-related toxicity in these heavily pre-treated patients:
(Update 5/15/20) The FDA approved rucaparib for men who have the BRCA mutation (either germline or somatic, and have had prior taxane chemotherapy and AR-directed hormone therapy.

Triton 3 (comparing rucaparib to abiraterone, enzalutamide or docetaxel) is ongoing.

(Update 2/22/21) Early results of the TALAPRO-1 trial of talaparib have been presented. The 128 patients were previously treated with docetaxel, and half had cabazitaxel too. The trial only included patients with genomic DNA damage-repair (DDR) defects.
Patients are encouraged to get the relatively inexpensive ($249) germline test, or if negative for actionable mutations, a genomic test of a tumor biopsy or of cell-free DNA (from a blood test).
Posted by Allen at 10:07 AM 1 comment: 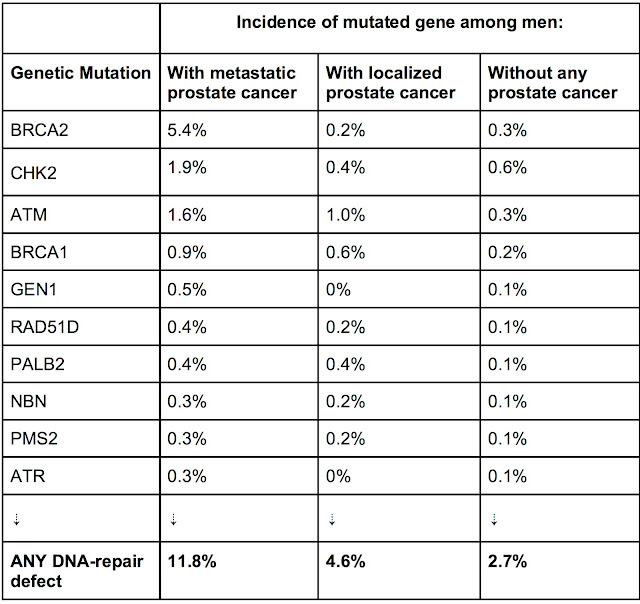