Brachy boost therapy (external beam plus a brachytherapy boost to the prostate) is the gold standard for high risk patients, reporting the best oncological outcomes of any therapy. While long-term adjuvant ADT has proven to be beneficial in prolonging survival in high risk patients when used in conjunction with dose-escalated external beam radiation (DART 01/05 GICOR), there has never been a randomized trial to determine if there is any benefit to ADT when used with brachy boost therapy.

All we have to go by are several single or multi-institutional studies and one large database analysis. Almost all of the studies so far show no effect to short-term (4 months, starting 2 months prior and running concurrent with the radiation therapy) adjuvant ADT.

Two of the studies used a boost of low dose rate brachytherapy, predominantly using Pd-103 seeds. Dattoli et al.  found there was no significant difference in 16-year PSA progression-free survival (PSA-PFS) whether 4 months of ADT were added or not. D'Amico et al. also found no significant difference in 8-year prostate cancer specific mortality (PCSM) with the addition of ADT. However, they felt that it was "approaching significance" (p=.08) and might become statistically significant with longer follow-up. In contrast to the Dattoli study, the D'Amico study did not treat the pelvic lymph nodes.

A recent analysis of the large National Cancer Database by Yang et al. did not detect any benefit to adding ADT on 8-year overall survival (OS). The database lacks specific information about type of brachytherapy, radiation doses, duration of ADT, and whole-pelvic treatment,

Several studies that used high dose rate brachytherapy as a boost also looked at this issue retrospectively. Demanes et al. was the earliest of those studies. They found no difference in 10-year PSA-PFS in their 113 high risk patients treated between 1991-1998. Several subsequent studies confirmed those findings. Galalae et al. concatenated the databases from 3 institutions: Kiel University, University of Washington Seattle and William Beaumont Hospital. Short-term adjuvant ADT failed to demonstrate improved 10-year PSA-PFS in the 359 high risk patients treated between 1986 and 2000. And the lack of effect was demonstrated at all three institutions. Kotecha et al. also failed to find any differential improvement in 5-year PSA-PFS among 61 high risk patients treated with HDR brachy boost at Memorial Sloan Kettering between 1998 and 2009.

There has been one "outlier" study. Schiffmann et al. reported on 211 consecutive high-risk patients treated at the University Medical Center Hamburg-Eppendorf from 1999 to 2009. After 10 years, the biochemical recurrence-free survival was 50% with the adjuvant ADT but only 39% without it - a very statistically significant and meaningful difference. However, even the "improved" outcome seems low compared to the ASCENDE-RT trial where everyone got early neoadjuvant and adjuvant ADT. In that trial, the 9-year PSA-RFS for high risk patients receiving the trimodality therapy was 83%. Another multi-institutional study of HDR-brachy boost therapy reported 10-year PSA PFS of 85% with ADT and 81% without ADT in high risk patients. It is plausible that the patients in the Hamburg study had more advanced disease and had more undetected micrometastases compared to the other studies.

The following table summarizes the treatments given in the aforementioned studies, and whether there was a statistically significant improvement (p<.05). 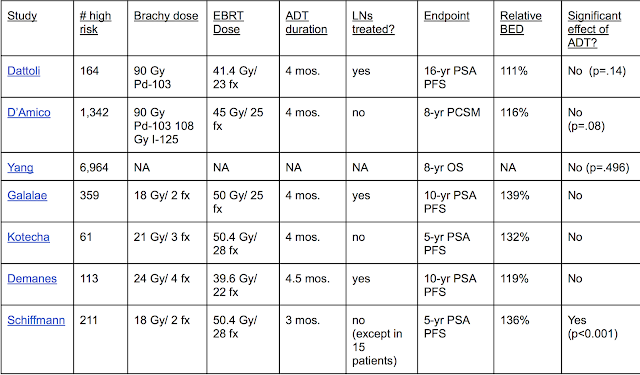 Relative BED is the biologically effective radiation dose as a percent of the BED of 79.4 Gy of IMRT in 44 fractions.

ADT is believed to have two effects when used in conjunction with radiation. Used before radiation begins (neoadjuvant use) and during radiation treatments (concurrent use), it radio-sensitizes the cancer. Lab findings suggest that it interferes with cancer cell repair of the induced DNA double-strand breaks. Used after radiation (adjuvant use), ADT is believed to "clean up" any remaining local micrometastases that survived. The death of cancer cells from both the radiation and the ADT dumps antigens into the serum that may activate T-cells. Those T-cells may hunt out and destroy small amounts of cancer cells nearby (the bystander effect) or systemically (the abscopal effect).

The bulk of the above retrospective studies suggest that the radiosensitizing effect is unnecessary with the very high radiation doses given with brachy boost therapy. However, what remains to be shown is whether long-term ADT might confer any additional benefit. The DART 01/05 GICOR trial proved that there was a significant benefit to 28 months of ADT compared to 4 months in high risk patients treated with dose-escalated EBRT. It is possible that while short-term ADT may have no benefit, long-term ADT combined with brachy boost therapy might.

TROG 03.04 RADAR was an Australian randomized trial that was designed to detect whether Zometa and longer duration of ADT (18 months vs 6 months) could provide better cures when combined with varying doses of radiation (radiation dose received was stratified but not randomized). Some of the patients received brachy boost therapy. In general, it found that higher radiation doses combined with longer duration of ADT provided the best outcomes. However, among those patients who received HDR brachy boost therapy, there was no significant difference in local progression (fig.2 - showing overlapping standard error bars) whether they received 18 months or 6 months of ADT. Future follow-up may reveal whether long-term ADT prevents distant progression.

The very high rates of cancer control (around 80%-85%) using brachy boost therapy may be as high as we can reasonably hope for, given that there will always be some patients with undetected occult micrometastases.

High-risk patients are usually given a bone scan and CT to help rule out distant metastases. Bone scans are non-specific to prostate cancer and are not very sensitive when the PSA is below 20 ng/ml. CT scans detect metastases larger than about 1.2 cm, but most metastases are smaller than that. The newly-approved Axumin PET scan, and the experimental PSMA-based PET scans now in clinical trials may be able to detect those distant metastases earlier. However, there are currently no PET scans approved for high-risk patients outside of clinical trials (they are only approved for recurrent and advanced cancer patients). In the future, those high-risk men in whom metastases have been detected via PET scans may be better candidates for systemic therapies, while those in whom no metastases have been detected may be better candidates for brachy boost therapy. It may be economically justifiable to use PET scans for this purpose. Perhaps we will see another 5-10% increase in cancer control rates, even without ADT, with better patient selection. A recent analysis of recurrent patients after prostatectomy diagnosed using the Ga-68-PSMA PET/CT found that 12% had previously undetected metastases outside of the radiation treatment field.

It is possible that pelvic lymph nodes are best treated with a combination of radiation and ADT.  Bittner et al. looked at 186 high risk patients treated with the brachy boost  therapy. The 10-year PSA-PFS was:

ADT seemed to have a bigger effect than whole pelvic radiation. This may be because the whole pelvic radiation dose is inadequate. The doses given to the pelvic lymph nodes are quite a bit lower (about 50 Gy in 28 fractions) than the dose to the prostate. If Dr. King is right that prostate cancer is inherently radioresistant and requires a higher lethal dose (about 79.2 Gy/44 fx) to be effective, even when the cancer is only in the prostate bed (see this link), it is possible that pelvic lymph nodes require a higher dose as well. Because of the potential bowel toxicity of escalated pelvic doses, adjuvant ADT may be necessary to achieve effective cell kill rates without dose-limiting toxicity. We saw in a recent analysis that, in the salvage situation among patients with GS 8-10, whole pelvic radiation and ADT both had significant benefits. Whether whole pelvic radiation is effective in high risk patients treated with brachy boost therapy and ADT is the subject of a major ongoing randomized clinical trial (RTOG 0924).

Until we have definitive results from randomized clinical trials, the decision over whether to add ADT to brachy boost therapy will be challenging. Many patients are persuaded by the extra insurance ADT provides, and that only a short course seems to be necessary. Others are so ADT-averse that even a short course is unthinkable, especially with no concrete evidence of efficacy.

The decision over whether to include the whole pelvic area in the external beam radiation field may be an easier decision. High risk patients have a significant probability that there are small metastases harbored in pelvic lymph nodes. Recent studies have shown the treatment field must be wider than  was previously thought. For some patients with anatomical abnormalities, low visceral fat, and a history of bowel disease, this too may present a challenging decision.