What should focal therapy be compared to and how does it compare?

In a recently published randomized trial of a new kind of focal ablation therapy for prostate cancer that was widely misinterpreted in mainstream media, the authors wrote:


"A pivotal comparative study was therefore necessary, but was challenging to design in a manner that would be acceptable to both patients and clinicians and in which the same primary outcome [histologically confirmed progression of cancer] could be assessed for the intervention and the comparator. We had three options for the comparator: surgery, radiotherapy, or active surveillance. For the first two options, a primary outcome that could be applied to both the experimental group and the control group proved difficult to find. Surgery (radical prostatectomy) would not be suitable for a biopsy-based outcome because there would be no prostate from which to take a biopsy. Radiotherapy would be amenable to a protocol-required biopsy, but the histological outcome would be confounded by the necessary neoadjuvant and adjuvant androgen suppression that constitutes the standard of care. Therefore, active surveillance was the only comparator that could reasonably be used over the intended time frame [2 years] of the study.

This is an odd statement, indeed. They rejected surgery as a comparator because salvage treatment is usually given before it is possible to obtain histological (biopsy) confirmation of spread to the prostate bed. This is reasonable. They rejected comparison to radiation because it is difficult to interpret a biopsy on tissue in which the cancer has been shrunk by androgen deprivation. However, all patients were low-risk patients who would almost never receive neoadjuvant or adjuvant androgen deprivation along with their radiotherapy, at least not in the US. Perhaps this is or was standard of care in Europe. That left them with active surveillance as a comparator, but the kind of active surveillance and patient selection for it bears closer examination.


"The European Medicines Agency agreed that we could reasonably exclude very low-risk patients. Therefore, lower and upper thresholds of risk (defined by Gleason score and tumour burden) were set, below and above which men were excluded.

Patient selection was also atypical in that no more than 3 positive cores were allowed, and the length of cancer in any one core had to be between 3mm and 5mm. Men with very small (<25 cc and very large (>70 cc) prostates were excluded.

Progression was deemed to have occurred if any of several criteria were met:
Only the first 3 had a significant effect. It should again be emphasized that many active surveillance programs now recommend radical treatment if a biopsy shows predominant Gleason pattern 4. Under such programs, many, if not most, in their active surveillance cohort would not be deemed to have progressed. This is especially true when mpMRIs are used early to rule out predominant pattern 4.

The kind of focal therapy used here (called TOOKAD soluble vascular photodynamic therapy) involves treating the patient under general anesthesia with an intravenous injection of a photosensitizing chemical, called padeliporfin. Optical fibers were inserted transperineally with one end at the tumor to be ablated and the other end attached to a near-infrared laser that delivered an energy dose of 200 J/cm. I believe the authors err when they characterize this as "non-thermal." The operation took about 2 hours, and patients stayed overnight in the hospital. The catheter was removed the next day.

Retreatment was allowed if the 12-month biopsy indicated residual cancer. It's important to keep this in mind when looking at the oncological outcomes. 32% received another treatment on the contralateral side. 6% received retreatment after 12 months. There is no analysis provided showing the toxicity among men who received multiple treatments compared to those who only received a single treatment.

After 2 years of follow-up among the men who received up to two treatments of the focal photodynamic therapy (PDT):
The European PRIAS study of active surveillance found that only 23% had progressed within 2 years, which was even less than the 28% progression rate found here with focal treatment, but PRIAS comprised patients who were very low risk only. In the Klotz study of low-risk patients, 30% progressed in 5 years - about the same as progressed in 2 years here with focal therapy. (See this link.)

Since this is only with 24 months of follow-up, we can conclude that 30% were able to avoid radical treatment for 2 extra years. (Update 6/2018: Even after 4 years of follow-up, the difference was maintained at about 30%). But if the active surveillance group had been initialized with mpMRI detection, it's not clear that this benefit would persist.

Side effects of treatment, while seldom serious enough to warrant intervention other than re-catheterization for a period of time, did occur. One in three patients suffered some kind of toxicity from the treatment. Most were low grade (grade 1 or 2) and transient. The ones that occurred significantly more in the treated cohort were (cumulative incidence within 2 years):


There was one case of anaphylactic shock due to the anesthesia. Three men had urinary retention serious enough to require surgical intervention.

Would these men have been better off with radical therapy? We can look at these results side-by-side with some toxicity outcomes of SBRT treatment. The table below shows the highest incidence of side effects reported by both studies. I chose this Georgetown study because they gave 2-year outcomes and because they included Grade 1 toxicity - often only grade 2 or higher toxicity is reported. As with focal therapy, almost all of the side effects were mild (grade 1) and acute, occurring within the first month of treatment, and returning to baseline within 2 years. Potency retention was 79% at 2 years. Similar to focal ablation, only 1% had any serious (grade 3) toxicity. However, none were life-threatening. 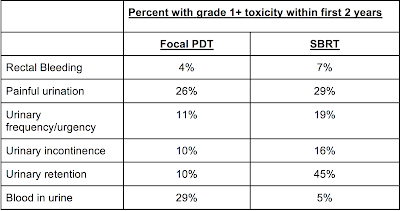 In the SBRT study, there were no biochemical failures in the first two years among the low risk and intermediate risk patients in the study. This compares to 51% with evidence of disease, and 28% with higher risk prostate cancer already in the first 2 years for the focal therapy, even with retreatment in some.

It should be clear to patients that the benefits of focal therapy depends on what it is compared to. This analysis should also alert patients to be wary of media hype. For a discussion of the unresolved issues in focal ablation, see this link.

The FDA oncologic drugs advisory committee rejected Steba Biotech's new drug marketing application. The decision may be revisited after Steba presents the results of a longer-running trial expected in 2025. In a Medpage interview, Patrick Walsh, on the committee, said:

"I think most of these patients [treated with TOOKAD] won't be told that at 2 years half of the men will still have cancer and in 28% it will be progressing."