We’ve all heard the age-related treatment recommendations of doctors. Comments like:
Some such statements have some evidence behind them, some are historical relics, and some are neither. In fact, there is a distinct lack of evidence about prostate cancer treatments in older men.

Radical treatment for low-risk disease remains controversial at any age. However, the question remains: can treatment of high risk or locally advanced prostate cancer provide a survival benefit in the elderly?

In an editorial in the Journal of Clinical Oncology titled “Ageism in the treatment of high-risk prostate cancer: how long will clinical practice patterns resist the weight of evidence?” Shumway and Hamstra made the following points:

On the other end of the risk spectrum, older men with low-risk disease are often over-treated. Daskivich et al. found that men with low- or intermediate-risk disease and co-morbidities that lowered life expectancy to under 10 years were often aggressively treated, yet there was no survival benefit to such treatment. Indeed, the survival benefit to immediate radical treatment of low-risk men of any age has been called into question by the PIVOT study.

Kowdley et al. argued that it is not chronological age, but physiological age that should be assessed in making a cancer surgery treatment decision. They further argue that it is overall health status, rather than age that must be assessed in the screening decisions. This runs counter to the AUA recommendation on prostate cancer screening, which argues against screening men over 70 years of age.

A Japanese study last year by Mitsuzuka et al. looked at 333 matched pairs of men treated with prostatectomy. In each pair, one was older than 70 years of age, one was younger. They were matched on pre-operative factors (i.e., PSA, positive cores, Gleason score, clinical stage, and risk group). They turned out to be very similar on post-operative pathology as well (i.e., stage, Gleason score, positive margins, and lymph node invasion). The older group had higher cancer volume, however.

After 5 years of follow up, the biochemical recurrence-free survival was not significantly different between the younger men and the older men, 83% and 80%, respectively. Five-year
prostate cancer-specific survival and overall survival were similar as well.

Another randomized clinical trial of prostatectomy or watchful waiting in Scandinavia with 18 years of follow up, SPGC-4, found no survival benefit to surgery among prostate cancer patients 65 years of age or older; however, there was a significant reduction in the risk of metastases with surgery. A Swedish study, Nilsson et al., found that age at the time of surgery predicted long-term urinary incontinence with a relative increase of 6% per year. Age at time of surgery also affects expected erectile function, according to Alemozaffar et al.

Liu et al. at Johns Hopkins used a Monte Carlo technique to simulate outcomes from active surveillance vs. surgery by age. They found that active surveillance had a net benefit in terms of quality-of-life years for low-risk prostate cancer patients older than 74 in excellent health, older than 67 in average health, and older than 54 in poor health. Yet, in 2009, twice as many men over 70 years of age had a radical prostatectomy compared to expectant management(26% and 13%, respectively) according to figures quoted by Maurice et al.

In the absence of data from larger randomized clinical trials, and the known risks of surgery in the elderly, such decisions much be approached carefully, especially among those with significant co-morbidities. NCCN recommends against surgery in low- or intermediate-risk men with life expectancy under 10 years.

Palliative Radiation/Conservative Treatment in the Elderly

The use of palliative radiation in elderly cancer patients has been decreasing over the years. In addition, its use decreases steadily by age, raising questions about under-treatment of the elderly. The following data were found by Wong et al. in the SEER/Medicare database:

·      Other variables collected were: co-morbidities, race, ethnicity, marital status, census tract median income, and the size of their urban area.

(Note: The RCT and Elderly cohorts include some men who were not high risk because of database limitations.)

Their findings are summarized below: 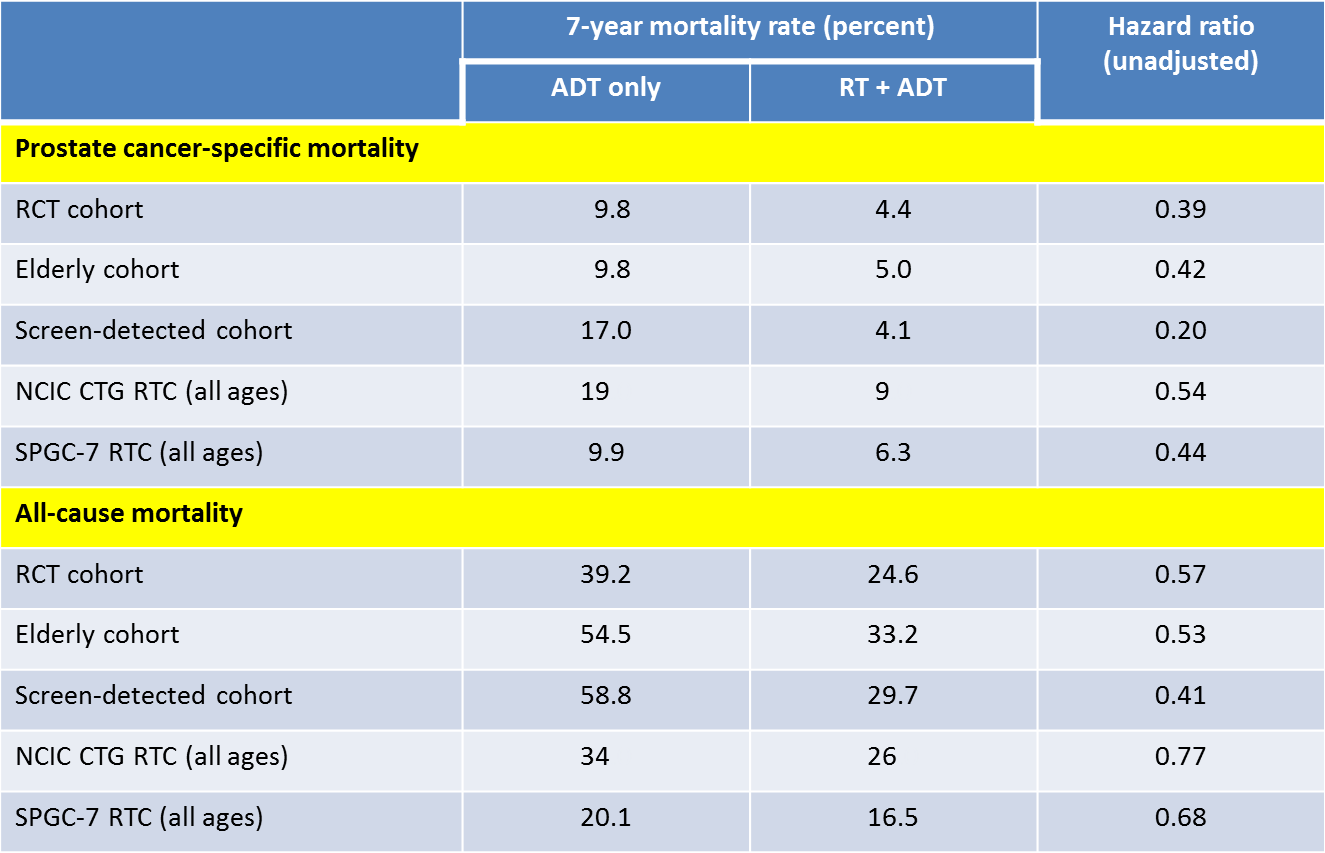 Compared to the younger men in the two RCTs, older men had about the same or greater reduction in prostate cancer-specific mortality and in all-cause mortality when they were treated with RT in addition to ADT.

“I generally think that doctors and patients should discuss the individual treatment decisions that older men face, including the evidence showing the benefits and risks of treatment.  For older men with prostate cancer, radiation therapy is well tolerated. There are risk factors that might increase risks of urinary or bowel toxicity, like prior history of transurethral resection of the prostate or inflammatory bowel disease, but these co-morbidities are independent of age. Age alone should not preclude patients and their physicians from considering curative cancer treatment.”

Taking these studies together, some generalizations can be made:
As the baby-boom generation in the US ages, it will become particularly important to address these concerns. It behooves patients, their families, and their doctors to consider each case individually, and not make decisions based on chronological age alone.

Note: Thanks to Dr. Bekelman for allowing me to see the full text of his study, and for supplying important summary comments.